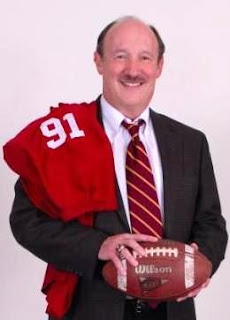 Meet Tom Thompson-author of Kick Start
“What you do today determines your tomorrow.”
As if to solidify the validity of that statement, Tom Thompson writes Kick Start Your Future, a biographical account of what happens when he repeatedly ends up on the wrong end of circumstances, only to rise above and succeed, seemingly to spite the odds that were continuously stacked against him.  Instead of using his misfortune as an excuse to develop an entitlement attitude, Thompson fought back to conquer higher ground each time. The result of working harder than the impact of the challenges in his life included returning to college and setting a NCAA record in his 60’s.


“I was proud, to be sure, but this achievement was about much more than merely kicking a football between the uprights. It was about proving that life can be meaningful and productive at any age. It was about encouraging people to fulfill their dreams, to live every day on purpose.” This is Tom Thompson’s story.


MN-Congratulations on the success of Kick Start! I read where the second edition will be released in early 2017. Did you have any idea as you were writing Kick Start that it would be so well received?


TT-Naturally, we hoped the book would reach a broad audience (e.g., both secular and Christian). However, the second edition will enhance Kick Start by telling the story of “after the kick” and sharing goal setting strategies and application information.


MN-Speaking of well received, let’s talk football for a minute. Take me back to the stadium, on the field, in the 2nd quarter of the game between Austin College and Trinity University on November 14, 2009. A certain kicker takes the field and he is an unusual one, at that. What happened?


TT-As the third string kicker and playing for an “old-school” coach, my chances of ever seeing the field during a game was remote. However, two weeks prior to the end of the season my kicking performance had become dramatically better. For example, during one practice I outperformed all of the other kickers (one of which was the starting all-conference kicker). The coach told me if I kept doing a good job, he would put me in to kick after we scored our first touchdown. However, I had to be told to go in to kick. I wasn’t going to assume I would be the kicker. Especially, if I would be kicking the PAT to tie the game against our biggest rival.


As I jogged on to the field, the noise of the crowd diminished into a white noise and time seemed to stand still. I could sense my heartbeat in my ears. Once in position, I let the holder know I was ready…the ball was snapped, but there was not enough on the ball and it was lying sideways on the ground. I was in mid kick when the holder recovered the ball at the last minute and placed it into position. The kick was good! And, as they say…the rest is history.


MN-You mentioned in Kick Start that you began having thoughts such as, ‘What if I went back to college, made a college football team, and played football.’ It is one thing to have thoughts, and quite another to pursue them. What drove you to act on these seemingly random thoughts, especially when you had already successfully acquired three college degrees?


TT-Honestly, I believed this was something God wanted me to do. In particular, my purpose in life is to encourage the Body of Christ to be physically fit. Many people may agree with the notion of “why” someone should be physically fit. Yet, too often people may have difficulty with the “how” of physical fitness. In that light, it is important for me to set an example.


In Kick Start, I mention the time when the football season was coming to an end. My wife encouraged me to finish my degree program in order to set an example for my teammates. Whereby, they would see I didn’t go to college just to play football. More importantly, they would see I finished what I started. In particular, how many people do you know that are a few credits short of earning a college degree? I remind myself of Jesus’ last words on the cross anytime I begin an endeavor. He said, “It is finished”.
MN-I loved reading that you were basically just given two fitness centers to run. Being so active in health and fitness up to that point as a martial arts expert (high level black belt, at that) and a personal trainer had to have made this a dream come true for you. On the other hand, I’m sure you have learned a lot about owning a business. How are your fitness centers doing today and how have you changed as a business owner through the process?


TT-This past spring, I made the decision to focus more on teaching and coaching football at Austin College, public speaking, and writing books. Thus, I have transitioned away from owning and operating fitness centers. However, I remain active in the business world with my real estate investment, leadership development, and corporate fitness management firm.


For many years, Jesus was only my Savior. The biggest change in my life came after I had made Jesus the Lord of my life. As a result, I began to view my business endeavors as my ministry. For example, Jesus ministered in the marketplace.


MN-Not only have you authored Kick Start, but you are a contributing author for a book titled Fit to Lead. Tell me a little about that project.


TT-Fit to Lead was a result of taking the current health and fitness research and leadership theory and suggesting a relationship exists between physical fitness and leadership performance. Central to the project were personal interviews with Bush and Gore from the 2000 Presidential campaign. My contribution to the project was as the physical fitness expert. Two of the co-authors were preeminent leadership professors, while, a fourth co-author was a prominent preventive medicine doctor.


MN-Looking at you today, you are an incredibly blessed and successful man, and it would be easy to misjudge that success by saying you’ve had an easy life. Kick Start delves into some of your difficulties and challenges, but for readers right now, what encouragement do you have for those that may be thinking their life is too messy to amount to anything?


MN-Being physically fit helps keep the mind and spirit fit, as well. What is one lifestyle change readers can make today that will positively affect and bring into balance their mind/body/spirit connection?


TT- Develop a new way of thinking. For example, we all know people who want to change their lives. Yet, they are not willing to change how they think. In order to develop an opportunity for long-term behavioral change an individual needs to change the way they think and submit their will to their new way of thinking. Further, just setting goals is not enough. One must set commensurate behavioral limits in order to create the best opportunity to achieve one’s goals.


Author Bio-Dr. Emmet “Tom” Thompson II is an active researcher, educator, business owner, motivational speaker and author. On November 14, 2009, he became the oldest football player in NCAA history and the oldest NCAA football player to score a point during a game. His Austin College jersey number 91 is on display at the College Football Hall of Fame in South Bend, Indiana. He and his wife Teresa have three children and live in Coppell, Texas.


From Amazon -A true story of overcoming obstacles to score in the most important game of all―life. Tom Thompson’s journey was fraught with many obstacles and setbacks from a very early age. From a broken home and the early death of his father, to divorce, financial stress, and physical injuries as an adult…it seemed to be one thing after another. Was this the way life was meant to be lived? Along the way, Tom’s life intersected with and was influenced by an assortment of fascinating characters including martial arts champion and legend, Chuck Norris, Elvis and Priscilla Presley, and president of the United States, George W. Bush. His is a remarkable story of stamina and faith, and of overcoming the odds to become the first over-60 NCAA football player. And his example will inspire the reader to Kick Start their life at any age.
You can connect with Thompson on Facebook.
Posted by ~Mary at 6:01 PM