It Was Out of Love by James S. Marr 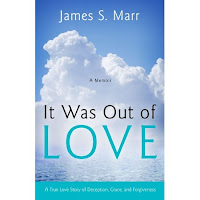 "It Was Out of Love” is a bizarre journey author James Marr began when he met his future wife."

If there is a true definition of bizarre, Marr’s story clarifies it. Believing the many lies in the name of love, and doing what he thought a committed, Christian husband was suppose to do, Marr fell in love with a woman he would later learn was a myth. Sure there were questions. There were red flags all over the place, yet Marr became weary of analyzing every detail that didn’t add up. It was hard to entertain those warning signs when Melissa seemingly had an answer for every question.

After 30 years of marriage, many of them impaired by Melissa’s health issues, Marr would learn the truth. You could not fault him for walking away, encapsulated by a rage that a false identity had constructed, had he chosen to respond to her revelations in that manner. Yet, when faced with the truth, he didn’t run. He remained by her side, the ever faithful husband, until death did part them.

Should readers decide to judge Melissa too harshly, remember the title: “It Was Out of Love” as it applies to her side of the story, too. Perhaps her betrayal was not formed purely from selfish motives. Could it be that she wanted to be loved so much that she tried to protect Marr from the ugliness of her life, and once that hypocrisy went to a certain point, there was no turning back? I say this not to legitimize her fraud, but to instead validate that sometimes love-or the desire to be loved-can lead to desperate measures.

The silver lining in his revelation is that Marr has not allowed this 30 year event to metastasize into a pessimistic view of God. He openly admits he should have prayed more for her healing and read more scripture to Melissa. He does not fault God in anyway, but instead peppers his autobiography with topic related scripture, lest the reader lose sight of the spiritual ramifications of his story.

I applaud Marr for sharing his story. It takes a secure individual to say “It is what it is” and believe that God is involved even in the sordid details. Does he believe he wasted 30 years of his life? From beginning to end, Marr celebrates the gift of Melissa’s love, and requests only that God remove the negative feelings associated with the experience so that he may remember her for the love she brought him. That does not sound like a cynical, jaded man who wants his reader’s sympathy. It sounds like a man who trusts God and wants his readers to be assured of God’s love and concern for us in spite of any pain we may encounter.

In that sense, it is fitting that he concludes his memoir with “Trust in the Lord with all your heart and lean not on your own understanding; in all your ways acknowledge him, and he will make your paths straight.”

Note-A copy of It Was Out of Love was provided for review purposes by WinePress Publishing.
Posted by ~Mary at 8:03 PM