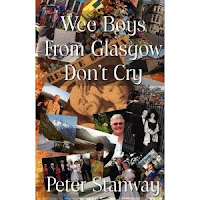 Reviewed by ~Mary
Wee boys from Glasgow don’t cry, but readers may when they read some of the heartbreaking stories author Peter Stanway shares in his book Wee Boys From Glasgow Don’t Cry. Whether reading about Stanway being rescued by his father from what could have been a fatal fire, to knowing he was choking back tears as a five year old listening to his Mom being abused in the adjoining room, it is impossible to remain detached from his written experiences.

It is amazing he survived his early childhood when accident after accident threatened to steal his young life. Later, at the age of twelve, he became physically active to avoid the shame his father placed on him for being “a sissy”. His crime? Playing Rugby instead of football. “I was fit but lonely”, he wrote. He began experimenting with existentialism, transcendental meditation, philosophy, drugs and alcohol. In pursuit of fulfillment, fantasy crept in.

Thanks to a Christian Geography teacher, Stanway asked Jesus into his heart but as he put it, “I knew nothing about the Holy Spirit. I had a two-cylinder faith, father and son but no Holy Spirit”, which he explains, is the source of strength and power to follow Jesus. His conversion was brief.

As a young man, he lived the life of a free spirited, free-willed, adventure seeker that proved to be controlled by addictions. Stanway was living on the street, going town to town, knowing he needed something more and honestly seeking it, but unable to make a long lasting change.

Meeting Nancy, getting involved with WOTS (Way of the Spirit) and pure determination proved to be Stanway’s stepping stone into permanent conversion. Ironically, once he is able to re-channel his energy and make tracks in the right direction, his past haunts him through a life threatening illness. Stanway is honest and revealing as he takes his reader through the liver transplant that literally saved his life.

Stanway is passionate about everything he does. It is evident prior to his conversion, but when you see him using his passion to create change in others, it is downright inspiring. He is a true people person-compassionate on multiple levels and willing to do what it takes to rescue others. He gets it because he’s been there. He is an unstoppable force, chasing God and the good in mankind with all he has. And these days, that’s a lot!

Wee Boys From Glasgow Don’t Cry isn’t just an autobiography, it is an example of how to minister and do it effectively. He is energetic and knowledgeable-a combination that proves to be lethal when used against the powers of darkness. His story will challenge ministers, motivate lay men, and encourage the reader. If you have ever wanted to make a difference, this is the man to learn from.